WELCOME TO JAMAICA!!! WHERE THE SUN IS ALWAYS WARM. ENJOY YOUR PRIVATE VACATION WITH OUR COMFORTABLE TRANSPORT EXPRESS BUS SERVICES
No Delays or Wait Time Once Your Seat is Reserve and Booked. We Are In The People Movers. We Cater to All Types of Cultures and Countries. New York U.S.A, Toronto Canada, England British, and The World
EMPLOYABLE CANDIDATES
EMPLOYABLE CANDIDATES. Join a dynamic sales team of an international franchise, home to some of the region’s top performers!
Is This Your Situation: Dealing With a Problem Tenant? 2021 - 2022 or, Worse Into the Future
What Are Your Legal Obligation, Property Owners, And Legal Remedies
Buying Land: Look Before You Leap
Why is This Area of Land Worth More In Dollars Than Another Location In The Similar Area
UPDATES: REAL ESTATE - The People Mover Express Limited, JAMAICA.
Real Estate: Property Management for Local & Overseas, Rentals, Sales and Purchases of Properties, Lease Agreement, Land Agreement and Time Shares.

Home buyers have not been disappointed by the performance of the Boulder housing market. According to our data, the average home has grown 276% in value over the past 25 years. Over that same time period, we estimate there was almost a 0% chance that a homeowner saw a significant decline in home value 10 years from the purchase date. That makes Boulder one of the most stable housing markets in the nation. It’s also a major reason why Boulder tops this ranking for the fourth straight year.

Austin-Round Rock, Texas is another metro area that has seen stunning housing market growth over the past few decades. According to our research, if you had bought a home 25 years ago in Austin, on average you would have seen it appreciate in value by 243%. To put that into dollar terms, a home you bought in 1993 for $100,000 would be worth $243,000 today. Austin-Round Rock was also a dependable housing market. This metro area came in tied for first with the lowest chance of a significant price decline.

Coming in just behind Austin-Round Rock and Boulder is Bismarck, North Dakota. Like the previous cities, your odds of taking a loss on a home in Bismarck were remote. Our data shows there were zero quarters of significant price decline over any 10-year period from 1993 to 2017. Home values have also increased greatly in the area. We estimate that from from 1993 to 2017, the average value of a home grew by 224%.

Fort Collins is the second of three Colorado cities to find a spot in the top 10. Investing in Fort Collins real estate was slightly riskier than any of the top three cities on this list. We estimate there was a 4% chance that a homeowner could have suffered a significant decline in the value of their home. But with that extra risk, Fort Collins also offered investors potentially higher returns. Fort Collins ranks second for average growth in home value over the period we analyzed.

Midland, in Western Texas, takes fifth. This metro has one of the lowest unemployment rates in the country, a sign of a strong local economy that can support a strong local housing market. Over the period we analyzed, Midland had a top-ranking score in chance of a significant price decline (meaning there’s a low chance that prices decline). It also had some of the highest growth figures. And while growth of 214% is impressive, if Midland wants to catch up to the other top cities, it will need to bump that figure up even higher.

Wyoming has two metro areas in this top 10. Up first is Casper. This metro area saw stunning growth in home prices from 1993 to 2017. Over that time period the average home increased in value by 233%. However, investing in the Casper housing market came with some risks. We estimate a 9% chance of suffering a loss (of at least 5%) in home value over any 10-year period from 1993 to 2017.

Grand Forks, home to one of America’s best hockey towns comes in seventh. This metro was a safe place to dock a down payment and buy a home. According to our data, the metro area is tied for first with a 0% chance of significant decline in home value. Unfortunately, the overall returns to owning a home here weren’t as high as in other cities.

Montana’s largest city cracks the top 10. If you had bought a home here in 1993, odds are that you would have seen pretty good returns. From then until 2017, the average home price increased by 178%. While those returns are not as high as other cities on this list, you could invest here without too much concern. The odds of finding yourself underwater on your mortgage were almost nonexistent in Billings, according to data from the Federal Housing Administration.

As mentioned, Colorado was a great place to invest in housing in the past. The third Colorado metro area to crack this top 10 is Denver-Aurora-Lakewood. This housing market was the riskiest to invest in among the top 10. According to our data, Denver-Aurora-Lakewood homeowners had an 18% chance of seeing a significant decline in their home’s value over any 10-year period (between 1993 and 2017). However, the area also had some of the most upside. Over the whole 25 years we analyzed, the average home price increased by 256%.

Cheyenne rounds out our top 10. This was another metro area where your home investment was safe from wild price fluctuations. The metro saw no significant declines in home value over any 10-year period. Cheyenne fell just short of the cities ranked above it due to returns that were closer to the 25-year average. From 1993 to 2017, the median home increased in value by 171%. 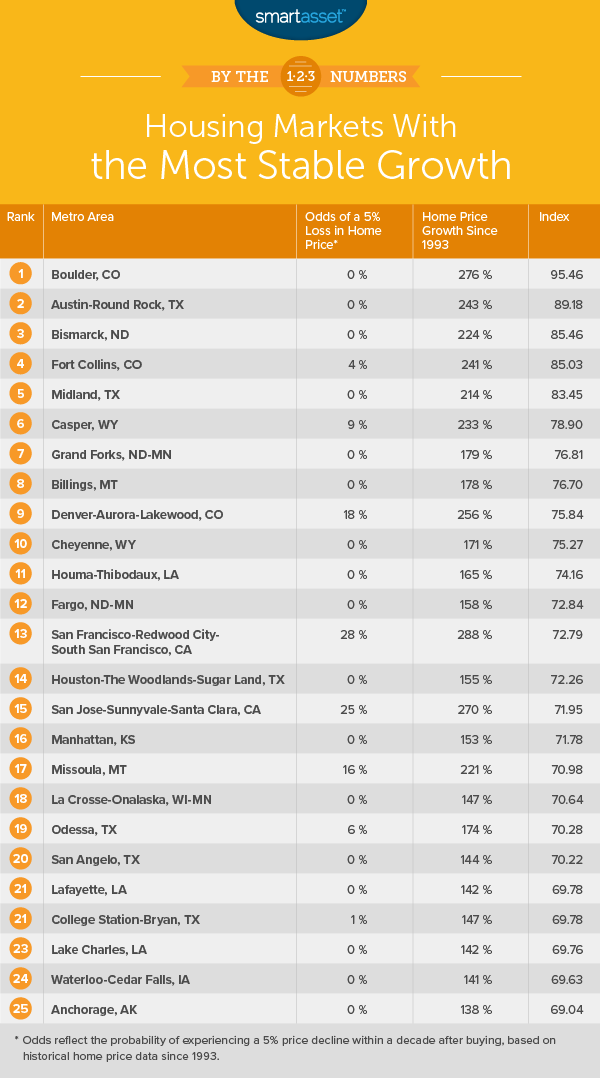 The Right Choice Investments Corporation - Making Your Dreams a Reality